Family of Vet Killed in Crash Shares Their Anguish

Appeals to driver in crash that killed soldier 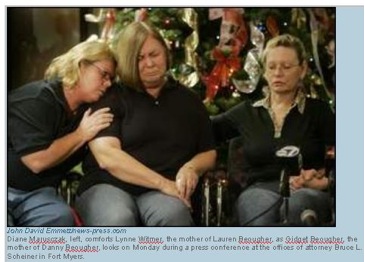 By Amy Sowder and Dennis Husty
The News-Press

Family and friends of the soldier who died in a crash late Saturday made an impassioned plea Monday for the driver of the other vehicle to come forward.

The crash killed Danny Beougher, 23, a staff sergeant with the 82nd Airborne Division who survived two deployments in Iraq and one in Afghanistan, only to die on Hancock Bridge Parkway in North Fort Myers near Cape Coral.

His wife, Lauren, remains in critical condition in the intensive care unit of Lee Memorial Hospital suffering from a fractured neck, a broken nose and a punctured lung. 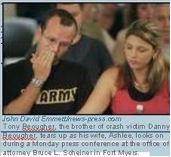 Meanwhile, highway patrol traffic homicide investigators are turning to forensic evidence to help crack the case and make an arrest.

The suspected woman driver, a woman passenger, and the truck's owner, a man, have given conflicting statements, said FHP Sgt. Owen Keen. Investigators so far have a suspect, a woman they believe was driving the Ford F350 pickup, but who ran from the scene.

However, investigators have not been able to place the suspected driver behind the wheel at the time of the crash, Keen said.

Investigators today will be gathering evidence from the truck and asking for help in identifying the driver.

Relatives gathered Monday night to tell the media the anguish they feel.

"Please come forward and take responsibility for what you've done ... look inside yourself and see how much we will be missing our loved one," said Tony Beougher, a brother of Danny Beougher, during a press conference at the Fort Myers office of Associates and Bruce L. Scheiner, their attorney.

Daniel "Danny" Lee Beougher, a Cape Coral native, was home on leave from a second tour in Iraq.

"We watched him get off the plane. He was smiling from ear to ear. He was looking forward to spending time with his wife," Tony Beougher said.

The two -- who were married last year just before he shipped out -- were preparing for a formal wedding ceremony Jan. 12 in North Carolina, relatives said.

The family, Tony Beougher said, has confidence in the highway patrol's investigation and that the person responsible will be found.

Dodson couldn't tell how long that would take, or whether the driver would face criminal or civil charges.

Investigators are convinced there were only two people in the truck that crashed into Beougher's Jeep, Keen said. One woman, who is believed to be the driver, was found walking along the side of the road and was taken to a hospital for treatment of cuts and released, Keen said.

A passenger in the pickup, Kesha Lee Stewart, 33, of Cape Coral, was treated for minor injuries.

Blood alcohol samples were taken from both women less than 1 1/2 hours after the crash and have been sent to a state lab to determine if they had been drinking, Keen said. He said the results probably won't be available for two to three weeks.

Complicating the case, Keen said, is the suspected driver told investigators the truck owner, her boyfriend, was behind the wheel at the time of the crash, Keen said.

However, investigators found him at home and took him back to the crash scene. He had no cuts, scrapes, bruises or other injuries and is not believed to have been in the pickup when the crash happened, Keen said.

However, he said all three remain suspects in the case.

According to Dodson and Assistant State Attorney Anthony Kunasek, criminal charges in cases such as this could include:

"You don't even have to know if someone died," Kunasek said about the injuries involved in crashes. "If it's that serious, the law states you should stick around."

Often FHP investigators will work with the state attorney's office in deciding whether to pursue civil or criminal charges in traffic fatalities.

If investigators can't prove criminal negligence, such as drunk driving, reckless driving or excessive speeding, then the driver can face civil penalties, including fines and court appearances.

"We really have to take it on a case-by-case basis," said Samantha Syoen, spokeswoman from the state attorney's office in Fort Myers. "There are so many factors to consider."

Daniel "Danny" Lee Beougher and his wife had traveled from Fayetteville, N.C., in their 2004 Jeep Cherokee to visit family in Cape Coral. They were heading west on Hancock Bridge Parkway, about one mile from Danny Beougher's cousin's house, when the accident occurred Saturday.

The Beoughers' Jeep was full of holiday presents. The couple were going to surprise Danny Beougher's older brother, Tony, whose birthday is today.

Josh Beougher, a cousin, had bought Publix subs for when Danny Beougher arrived. The grocery subs were his favorite and weren't available in North Carolina. Danny Beougher had sent his cousin a text message at 8:30 p.m., saying he was nearby on U.S. 41. He died minutes later./

"He only had one more mile to go and he would have been home-free," said Josh Beougher, 23.

Danny Beougher, youngest of four brothers, was a U.S. Army sergeant in the 82nd Airborne Division who had returned from Iraq on Oct. 26 and was stationed at Fort Bragg, N.C. With minor cuts from shrapnel, he had survived an attack that killed another soldier. He had been deployed twice in Iraq and once in Afghanistan.

"He was one hell of guy," Josh Beougher said. "I know it sounds cliche, but even if you wronged him, he'd stand by you."

Anyone with information about the crash or the driver of the 2006 Ford F350 is asked to call the Florida Highway Patrol at 938-1800.

The Beougher family is in the process of working out details of Danny Beougher's memorial services with the U.S. Army.