Santa came early this year for residents at Gulf Coast Center in Buckingham and - he rode a Harley-Davidson. 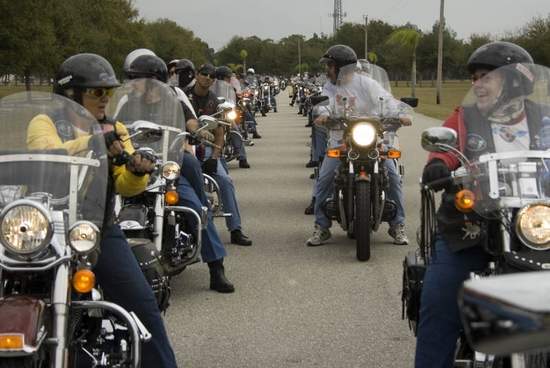 His sled wasn't pulled by reindeer but by a shiny chrome engine. His elves rode along with him sporting bandannas, tattoos and leather jackets, and carrying toys in their knapsacks.

Close to 400 bikers drove to Gulf Coast Center in Buckingham on Sunday afternoon, honking horns, waving and providing an estimated 500 to 600 presents to the facility's 86 residents.

Gulf Coast Center has served as a home for developmentally disabled adults since 1960.The Southwest Florida Chapter of ABATE, or American Bikers Aiming Towards Education, has held its Christmas run for the past 28 years, with participants riding in on 700 to 1,000 motorcycles.

Center administrator Michael S. Mayfield said the residents look forward to the event because they know it's all about them.

"Who doesn't like attention? We have people come out here from all walks of life, a few meet the residents and everyone shakes hands. It's really a great event because it makes them people, too," Mayfield said of the residents.

The residents were taken - some in wheelchairs, others driven on golf carts from their respective homes on the sprawling site - to a large green gym in the middle of the property. Slim pathways led from their homes to the gym. Mayfield said there are residents who have lived at Gulf Coast for 40 years.

Many donned Santa hats as they waited near the road for any sound of an engine. Residents shouted cheers and applauded as the first couple of roars of V-twin Harley-Davidson engines rode into the area, the line of shining chrome burgundy, blue and green motorcycles going far past the entrance.

This was the second to last run the center will see. Gulf Coast Center will close July 2010, the result of a 1998 class-action lawsuit in which the Advocacy Center for Persons with Disabilities argued that disabled people belong in community-based group homes, not in institutions. Members of ABATE, including Douglas Rossi, said they want to make next year's run count.

"This year the turn-out wasn't as large as last year," Rossi said. "We really want to make a boom next year and bring out over 1,000 members."Residents were surrounded by guardians and employees as the bikers walked into the gym and presented Mayfield with gifts.

Santa stood next to his bike with Mrs. Claus and some watched in awe.

Barb Yeoman's son, J.J., received beautiful presents. He'll find out what they are in a few days."We love to come with him and see them ride in," she said.

The run has been sponsored by the Bruce L. Scheiner law firm for more than 10 years. Scheiner was among the riders, in the passenger seat of a white Mustang that hauled in more gifts."The people out here at GulfCoast Center are basically forgotten," he said. "It's a great feeling to remember them even if it's just once a year."

Mark Decelle, 59, went on the first Christmas ride in 1984. More than 20 years later, he's still participating. Sunday, he rode one of his three Harleys. He said the event was at its peak when it began."It doesn't attract quite as many now," he said, "but it's still really great to help people."

Audrey Cran has a grand-daughter with a developmental condition. That's why after volunteering at the center she came back for a second year to play her role as Mrs. Claus."It's amazing to see these people," Cran said. "It really warms your heart. It's wonderful and just so rewarding."